Wow, I saw The Dead Don’t Die (2019) by accomplished cult director Jim Jarmusch working with an amazing cast and following up his terrific vampire film Only Lovers Left Alive. Wow. Roger Ebert once said something to the effect of “The worst kind of movie is a comedy that doesn’t work.” Yeah. That sums up that The Dead Don’t Die.

So let’s look at a better The Dead Don’t Die, this one a TV movie from the golden age of TV movie horror, the 70s. It’s no classic, but it is a good deal of fun, mainly because watching it now we’re seeing a film made over forty years ago that was trying to re-create the feel of the sort of film made forty years before that… and not a classic noir-type film, but a b-movie horror programmer about resurrected corpses commiting crimes. Karloff did ’em, Lugosi did ’em, Monogram made ’em, they’re all terrible but fun! (The best is the legitimately great Universal serial Gang Busters, which cops out with a Scooby-Doo ending but redeems itself with the villain getting decapitated by a subway train. Jinkies!) It’s not well thought of by critics and horror historians, but it is actually very well done. It’s a Dan Curtis production (king of 70’s TV horror!) with a solid script by the great author Robert Bloch and nice atmospheric direction by genre artiste Curtis Harrington. The cast is full of familiar faces like Ray Milland and Joan Blondell, and, ok, George Hamilton is a terrible leading man but in his defense he’s got more personality than the bland heroes of 30s B-movie horror, like what’s-his-name and that-guy-you-know-he-was-in-that-thing. Plus you get to see Reggie Nalder rise from a coffin which is always fun!

There doesn’t seem to be a good quality version of this out there alas. This one is a VHS rip and the noirish cinematography renders some scenes illegibly dark. Still, give it a whirl! Enjoy! 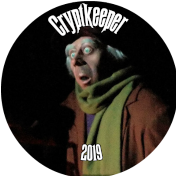