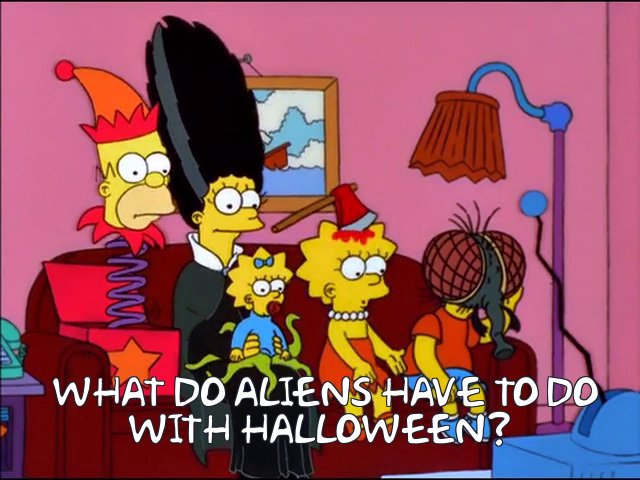 I would vouchsafe to say that aliens have, on the whole, delivered one of the strongest fields of good spooky horror movies, moreso than just about any other type of celluloid fiend (as well as no shortage of crap, but that’s another-never-mind). One can easily find a dozen or more films that meet or exceed the Halloween criteria – Alien, The Blob, Fire in the Sky, Communion, I Married a Monster From Outer Space, Invasion of the Body Snatchers (50’s AND 70s versions), Planet of the Vampires, Day of the Triffids, Village of the Damned, on up to recent chillers like Attack the Block and the underseen Alien Raiders. Is that a dozen? Throw in Forbidden Planet to make 13 and you have a nice all day marathon of near-perfect Halloween alien movies without even touching the film I’m picking as the ultimate Halloween alien-horror film…

The Thing from Another World (1951) is a terrific Halloween watch, so much so that it’s actually being watched by the characters in the movie Halloween (1978) during Michael Myers’ rampage. It features a series of tense set pieces, an isolated and eerie setting (a wind-whipped arctic outpost during a blizzard), several good jump-scares (including one all-time classic), and just a sense of overall spookiness (the saucer in the ice! those blood-drinking plants in the science lab! the mewing sounds the monster makes out in the windy darkness!). Moreover it features a crew of well-defined characters and crackling, well-written dialogue… and as a bonus, because it’s a Howard Hawks production, the women characters are smart and brave, give quips as good as the men and (this is still a problem in movies now let alone in the 50s) they have good ideas and opinions that the male characters ask for and actually listen to… I know! Mind-blowing stuff! 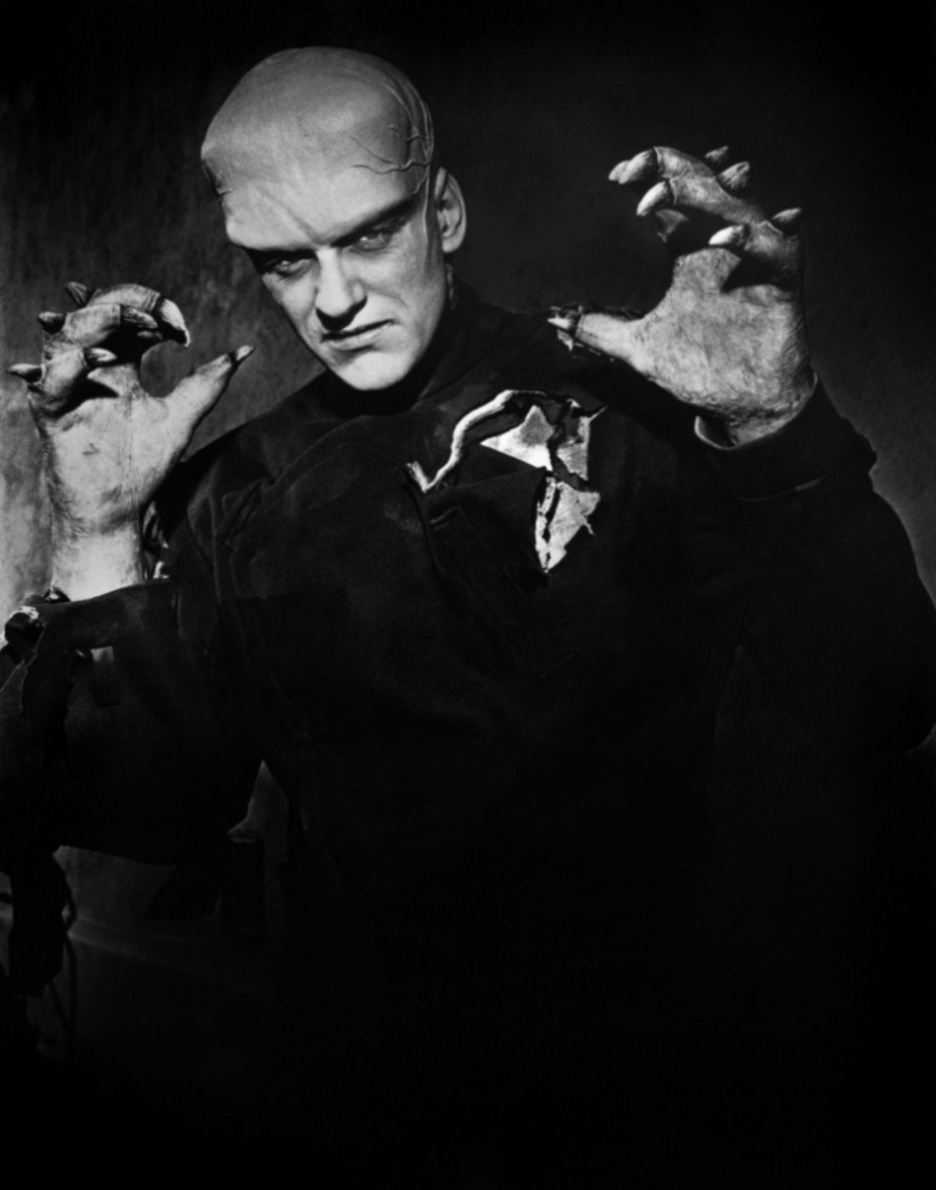 Okay, the monster is just James Arness (later a TV superstar in the long-running Gunsmoke series) in a Frankenstein costume. Fortunately we don’t see him much, usually just enough that his size and bearing  make him quite frightening, even at the end when he steps out of the shadows for the finale. If that’s a deal-breaker for you, read what I said in Day 2’s post!

Now of course the 800-pound-gorilla-that-grows-two-heads-and-tentacles-because-it’s-actually-a-shape-shifting-alien in the room is John Carpenter’s 1982 remake, which is a masterpiece in its own right, an absolute must-see for any horror fan and a terrific Halloween watch to boot. But I give the 50’s version the edge for one reason: it’s more fun. Carpenter’s human characters are surly, suspicious, isolated and cynical (justly- it fits the theme of his film). The 50s film, on the other hand, is filled with likable, witty, and personable heroes who band together to defeat an alien threat and even stick up for the Misguided Scientist Who Nearly Doomed Them All in the film’s conclusion. I’m not picking one approach over the other, both films are terrific. But fun is a huge part of the Halloween experience and The Thing from Another World is just plain More Fun.

Sharks? Giant monsters? Don’t worry, as the month stretches on we will delve into the more Halloween-y genres of horror. But it should go without saying that big bugs and beasts have their place in the Halloween pantheon, regardless of their connection (or lack thereof) to Celtic fire festivals.

And, unlike our previous subject, the also-not-strictly-speaking-but-nevertheless-scary sharks, there are many good Giant Monster movies, whether we’re talking kaiju (the original Godzilla (1954) or the surprisingly tense Terror of Mecha-Godzilla (1978) to name just two) or the big-bug 50’s (Tarantula, The Black Scorpion) to early Ray Harryhausen (The Beast from 20,000 Fathoms, It Conquered the World) up unto recent days (Monsters, Cloverfield) and let’s not forget the original King Kong (1933) which was and remains possibly the greatest adventure movie of all time, and still I’m just scraping the surface here. However, how many of these are really Halloween entertainment?

To my mind, only one.

Them (1954) was one of the first Giant Monster movies of the 50’s and remains one of the best – then or since. And, importantly to our “spirit of Halloween” countdown, it is one of the spookiest. Who can forget the little girl, screaming about “Them! Them!” and the eerie whistling sounds across the wind-whipped desert. Or that first vision of the enormous Ant appearing out of the dust, mandibles snapping? Yes, the ants are giant puppets and look a little silly. So does Jaws, and you know what? I thought the FX in John Carpenter’s The Thing looked fake then, and I still do now. So what? In context they’re horrifying and the same go for these ants. This is nightmare material, and if you want to giggle about it, get over yourself. Invest in it a little. You’re only letting yourself down.

(BTW, I saw a movie not too long ago that used Bedsheet Ghosts. That’s right, the ghost was a guy under a bedsheet. The movie had problems but the ghosts weren’t one of them. It worked. It was spooky. In context, it worked.)

What makes Them! work so well is that it knows how to build tension, and it delivers us interesting and  competent characters who we want to see triumph (and when we lose one of them, it hurts). What makes it such great Halloween entertainment, beyond what I mentioned before is that…

The ants hide in the sewers. Some kids are trapped in the sewers. Our heroes go in to rescue the kids. This is good, scary, haunted house horror that features plenty of nightmare food (have you ever looked through a microscope at an ant? Creepy). Nothing says Halloween like sharks, amirite? Surf and sun, swimming and scuba diving – up here in Maine you can barely do that in July, let alone October! But I thought it fitting to begin this month-long contemplation of the most autumnal of holidays with a transition out from halcyon summer, and a hungry shadow looming in the cold dark water.

The ocean is a fine metaphor for our subconscious, and we feel a sort of amniotic comfort floating in water, don’t we now? And at the same time, we are never more vulnerable, buoyant flesh and swirling limbs, surrounded by the unseen, the unknown. So there is a natural power to the image of the shark, the predacious lurker, the lunger from the darkness, sudden, sharp. 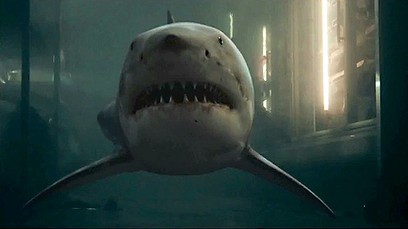 One would think such a primal fear would easily translate into any number of tense and terrific multiplex fear-fests, but one would be wrong, so so wrong. The number of truly good shark movies can be finger-counted by a lawman who was slower pulling back from the chum bucket than Sheriff Brody.

In pondering which shark movie was best for Halloween viewing I considered The Reef, which is good and scary but not “spooky”, and Bait, the sharks-in-a-submerged-supermarket thriller which takes its silly premise seriously and has a nice “haunted house” feel, but I’m going to go with the obvious choice here.

Jaws (1975) is, of course, as familiar as the back of one’s hand (though I’ve often wondered if people who say that cliche would be able to pick their own hands out of a pile of hands of similar size), but it has such a great number of scenes that go beyond suspenseful and horrific to achieve that superlative state of prime Halloween, genuine spookiness. The opening night-swim, the fishermen on the dock, the autopsy on the dead tiger shark, Quint’s tale of  the USS Indianapolis, Hooper’s dive in the shark-cage; these are all wonderfully spooky scenes, as deliciously chilling as any tale told by firelight.

But there are two scenes that are just plain classic Halloween to me. First, Hooper’s nocturnal investigation of the half-sunken fishing boat. Everything about this scene is designed to elicit maximum chills, up-to and including the funhouse pop-up scare of the fishermans decaying head. This is a haunted-house moment, peak Halloween.

And second, I want to single out the attack in the estuary for this one nightmarish image, the toothsome face appearing out of the depths below the water. It has an archetypal, primal terror to it, and that nightmare quality is also peak Halloween. 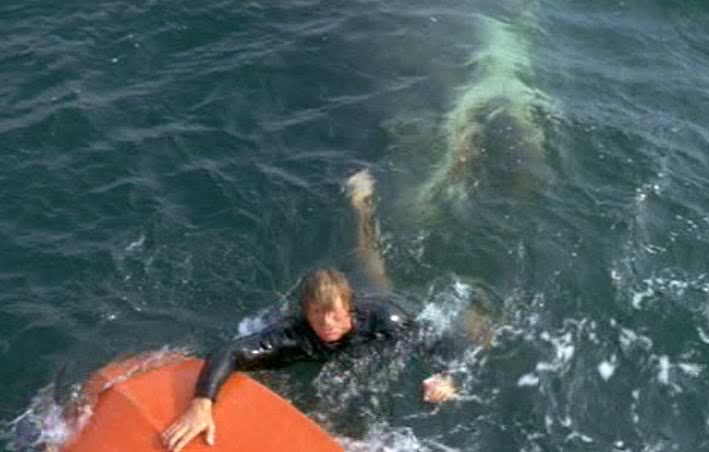 (It reminds me of the famous painting Watson and The Shark btw, not sure if that was deliberate)

So settle in for the chill cold months with dim remembrances of summer’s warmth and raise a glass to congratulate yourself on another summer survived shark-free. More chills to come!

Shadows deepen. Days shorten, the air grows crisp with chill and the taste and smell of decaying foliage. Things are dying, yet I come alive. The night approaches, the long, dark wonderful night, the all-hallows, the samhain, the magical night when the veil betwixt breath and death grows thinnest, when it is possible, if not always desirable, to step between worlds, if only for the shortest time.

The night of Halloween.

I love Halloween. I live for it, actually. And I have some thoughts about what constitutes the Halloween spirit. Starting October 1st I shall be participating in the annual Countdown to Halloween and in that spirit I will be posting daily content, including a movie-of-the day that I feel best represents the spirit of the day in 31 different horror genres (of my choosing), along with an analysis of each of these self-same genres. Should be fun!

As a matter of course I will also be posting some new musical material including a few videos and have been toying with the idea of linking to the work I’ve done so far on a Halloween-related novel project as a free downloadable ebook. We’ll see.

Anyway, when awakes the sun on October 1, the fun, the fun shall have begun. See you then!